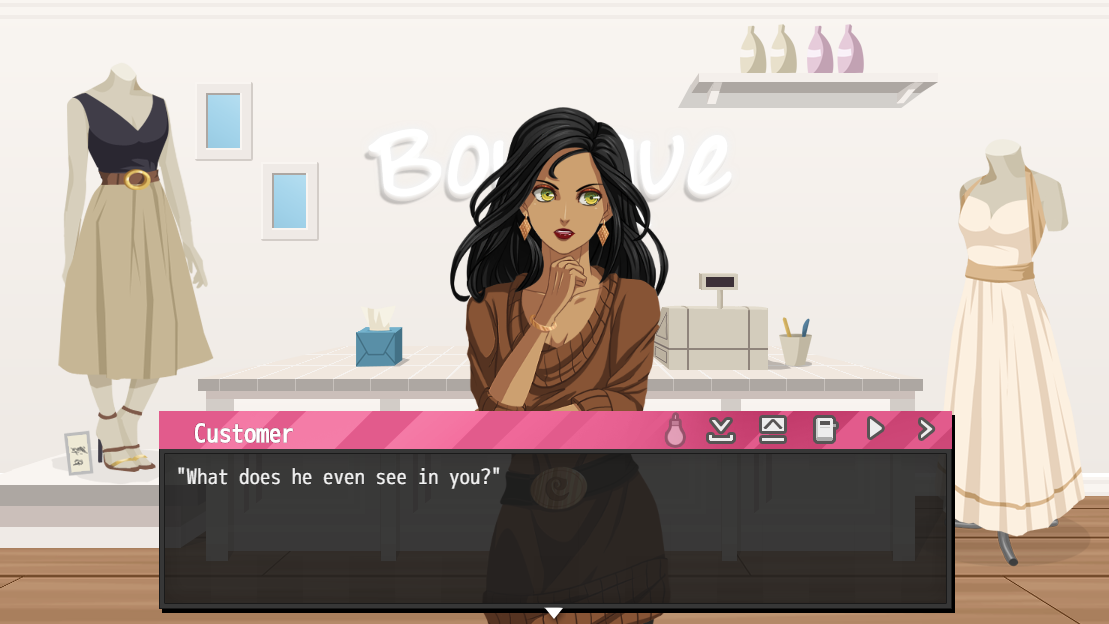 Patrons will be able to receive version 1.5.4 this month!

Support me on Patreon here and play the latest update of Tailor Tales.

1.5.4 is another exciting update because it contains three new features:
- Night mode
- The ability to hide the text box (pressing shift)
- No more accidental selection of choices - spacebar no longer confirms a choice

Of course, Patrons are able to continue Dimitri's route once more. Plus supporters get to play Dimitri's chapters 24-25, and normal supporters get chapters 22-23. Chapter 25 is where the route splits, so people will be locked into an ending from then on! Not to mention, chapter 25 contains a very hot Dimitri CG.

I've worked very hard in August to finish a bunch of things, including wrapping up Dimitri's endings (chapters 26 & 27). I still need to finish his epilogue though, but that's something I'll focus on in September.

For people who have been waiting patiently so far - after all, the last public release of Tailor Tales was in September 2017 - you'll be happy to know Dimitri's route is coming close to an end, which means the public release won't be too far off. I'm looking at late December or early January as a release date! The version that will be released, is 1.6 - and it will be an official release. No longer will Tailor Tales be in beta mode. This is the game, people!

I've also been working on Caine (since he'll be released after Dimitri). He's a blast to work on, I hope you will all enjoy him as well.

when will the update be available to non patrons?

The public release of Tailor Tales will be in January! The itch version will get updated and it will get released on Steam as well. So in just two months :)

I’m exited already!! Will it still be free?

You only pay for Tailor Tales Plus, which has adult content and some extra features. You can read more info about it here.

Uggh I wanna do Caine's soooo bad!!!! I'm looking forward to it! Keep up the good work!

I need this, I need this so fucking bad I'm tempted to go get a job just to become a patreon I LOVE DIMITRI.