There are plenty of things to update you on! But let's start off with James' route.

James
Currently sitting at 192k words for his script, 26 chapters out of 28 programmed and playable, James' route is nearing completion! There are 3 chapters left to write and program. His route will most likely finish development in January. Patreon users will be able to enjoy James' epilogue (chapter 28) in March.

Roughly speaking, that means free users of Tailor Tales will be able to see a James release date around May! If everything goes according to schedule, that is. James' route took longer than Caine to develop, simply due to the sheer amount of words and new content that was needed. His route will be nearly twice as long as the others. I didn't mean for it to happen, since I want to make sure every love interest is given the same attention, but that's just how the story went. James' route is very slow burn. It is also the first route that makes use of the LI saying the player's name (provided the name matches one of 200 existing names). 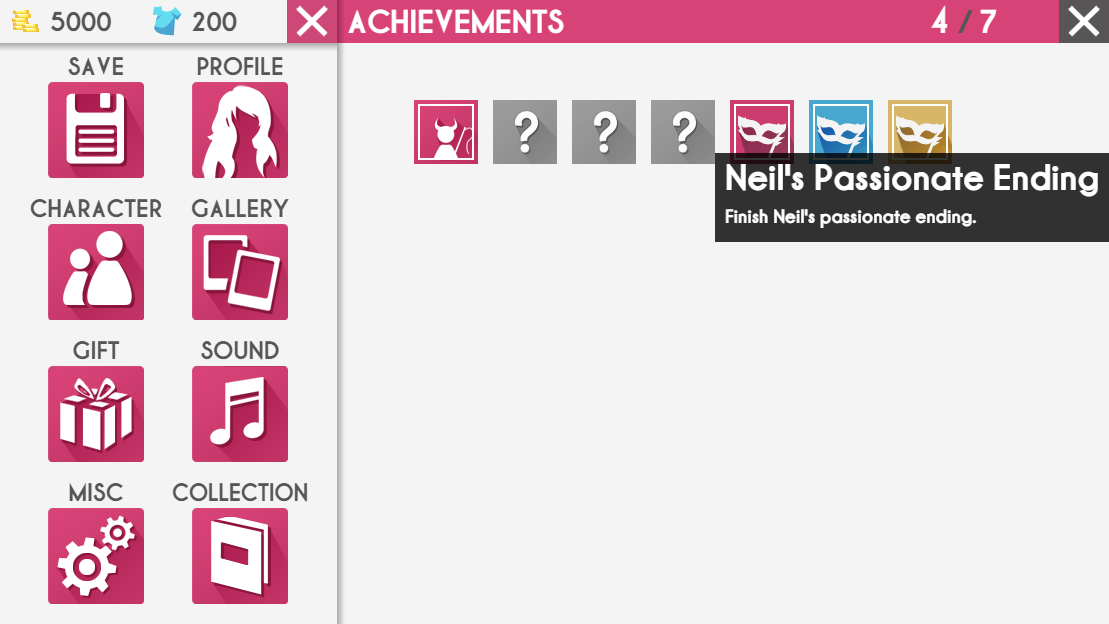 New features
Now, onto new features! Since the last release for Tailor Tales (version 3.0.6), a couple of things have been added or changed. First up; an entire new original soundtrack, composed by Joel Steudler! What was wrong with the previous OST? Well, nothing, it was great. However, they were purchased from a stock website and the license didn't cover my usage anymore, so I was forced to swap it out. Now 95% of the tracks have been replaced with an original song. I love them!

Achievements have now properly been added as well. The concept for a fashion show was promised earlier, but I had to scrap the system, sadly (along with the date system). No more fashion shows, no more competing to earn outfits. I don't want to get into it but I had to compromise and I settled for an achievement system! Each achievement unlocked will earn you an outfit and you can dress up your avatar with it. These achievements range from completing a certain ending to finishing X amount of clients. Achievements will also unlock on the Steam version. 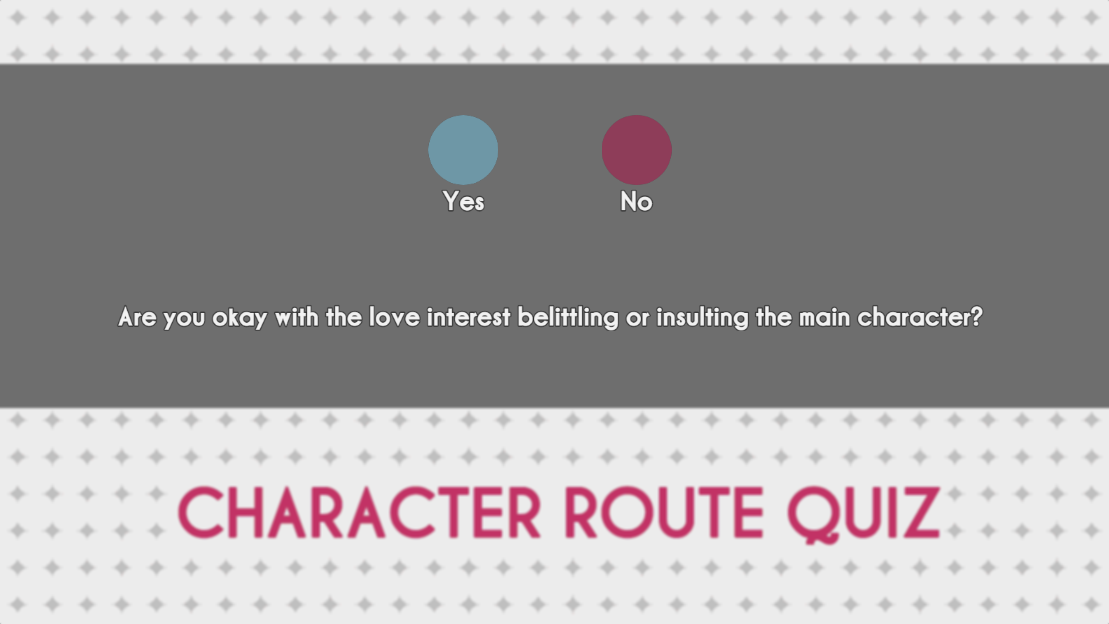 New players who have trouble jumping right into a route from the start can take a short quiz to find out which route suits their tastes best. There are 11 questions. For example, it may ask if you prefer if the LI is younger or older than the MC. Or it will ask if you enjoy modern settings or fantasy etc. It's pretty accurate at picking a route you would enjoy! 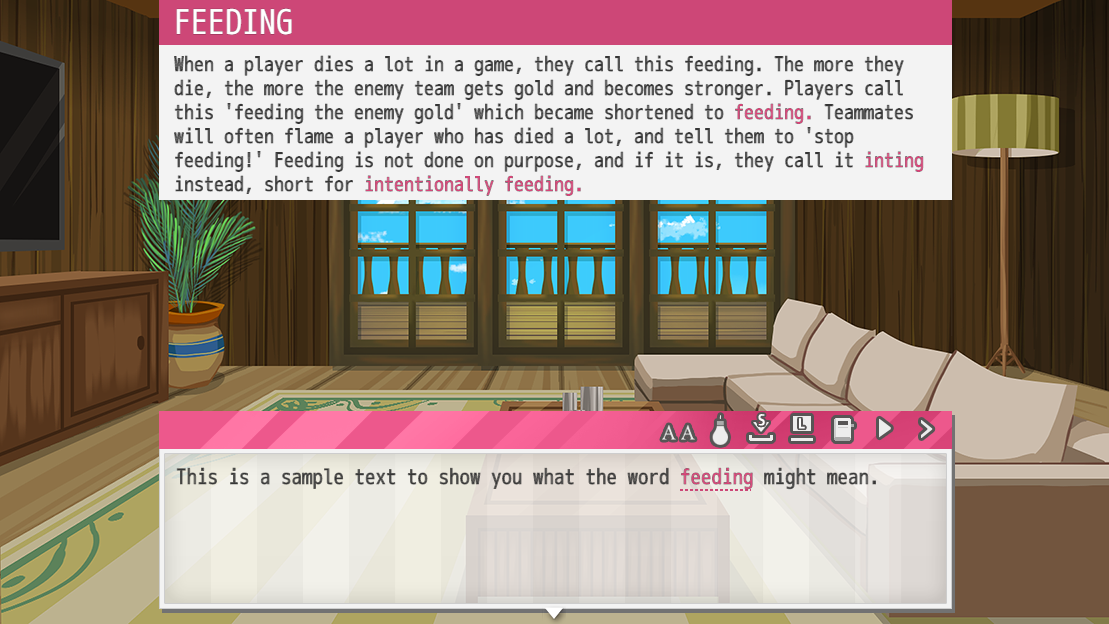 In preparation for Aiden's route, a dictionary function has been added. In Aiden's route, the MC is a player of a popular MOBA game and it is referenced a lot in the story. Players who have never touched a MOBA before in their life would be completely lost at some of the terms used, hence why hovering over the word in question brings up a definition entry.

And that is it for the update :)

Just here to support this masterpiece. You have gotten so far! You're doing sooooo good I'm so proud ;u;

Will taylor tales plus ever be available outside patreon?

Tailor Tales Plus will be available as DLC on Steam. I will be working on this once James' route has completed development.

I'm gonna instabuy it immediately when it's there!

A true masterpiece, Celianna. I have enjoyed this game far more than many I have played.

Ahh, I'm so excited! <3 Thank you so much for this amazing game, you're so talented I'm honestly in awe.

Tysm for the update! Can't wait to be able to play james  route. <3

You have worked hard. It seems yesterday when we got Caine's story. Thank you for the lovely update! Stay healthy, Celianna!

Looking forward to his route! Thank you for all your hard work <3

I played two routes and now the games wont load my manual save and I updated the game but it still doesn't work. do I need to delete it? if so will my progress be saved? I hope so I have coins and money saved on there! The last game I quick saved was the first route I played, and there were a couple more chapters left in that route.

Hi! What seems to be the error when loading your manual save file?

The game keeps a back-up save file in case your main one gets corrupted. Since your quick save file seems to still be in order, then your back-up is probably working as well!

1. Open the folder Tailor Tales is in

2. Browse to this location: Tailor Tales > www > save

3. In that folder, you will see a file named "file1.rpgsave" rename this to something else, like "corrupt.rpgsave". Then, click on the file "file3.rpgsave" and rename that one to "file1.rpgsave

4. Once you've renamed file3.rpgsave to file1.rpgsave, reboot the game and load your manual save file.

5. It should now work! If you're still getting the same error, then both your main saves are corrupted and you will have to continue from your quick save instead.

Will you make it so the Steam one supports Mac?

There will be no Mac support on Steam. I don't officially support Mac, and only Itch gets a sort-of-working version for Mac.